This pandemic (COVID-19) is a disease that affects multi-populations over multi- countries and multi-continents. It’s in all fifty states and almost all over the world. It’s a silent and deadly enemy to the people and the economies.  Some have even recommend it be handled like a special military operation.  https://www.cbsnews.com/news/what-kind-of-leadership-does-our-nation-need/ 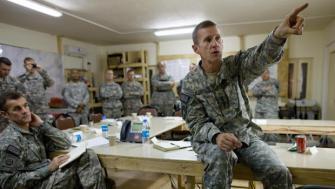 Stanley McChrystal is a retired Four-Star Army General who near the end of his career led the Joint Special Operations Command which included Army Rangers, Navy SEALs and the Delta Force; that’s a highly trained fighting force of 7,500, that’s able to handle some of the most challenging situations in the world.  They understand the importance of Logistics Operations. And it’s going to take a lot of special  team work to defeat this situation.

General McChystal (the tested warrior) said that leaders have to be brutally honest with themselves about what the real situation is, and that they are trying to do. He said that they should be extraordinary candid with their followers; one it’s a sign of respect and it’s just essential for long term effectiveness.  Leaders have to stand up, even when it’s hard, morally questionable, physically dangerous and tests the mantel of the best trained organization.

Dr. Penny Wheeler (the healing director) runs Allina Health with 11 hospitals and 90 clinics and oversees an organization of more than 29,000 employees. She said her job is to try to learn from her staff and to get barriers out of the way, for effective communication. Don’t be in denial of what the true situation is, and get the information from every vantage point from the people closest to the work. Collaborate and communicate then make your decision based on the best information.

Father Joseph McShane a (Jesuit Priest and President of Fordham University) in New York said that you have to begin with self knowledge; know what your priorities are, be wise enough to ask for advise, and be humble enough to except it. Tough situations bring new awareness: He has ‘seen‘ the University church stained window for years, but this time he “saw it” and it brought tears to him, because it depicted, St. Aloysious  Gonzaga, who died of a plague he contracted while caring for one of the victims of that plague. And even in this perilous time, there is still goodness that is showing itself in the American people and people all over the world. There are still Heroes among us.

One such hero is Navy Captain Brett Crozier, who was relieved from his command (fired) for standing up for his crew, on the Aircraft Carrier USS Theodore Roosevelt. As a former  enlisted person, a Non-Commissioned Officer (NCO) and Commissioned Officer I learned that discipline can be taught, but respect must be earned.