Miller manned an anti-aircraft gun and returned fire to aircraft during the attack on Naval forces during the  Pearl Harbor attack.  As a result he was awarded the Navy Cross by Navy Admiral Chester W. Nimitz in 1942. 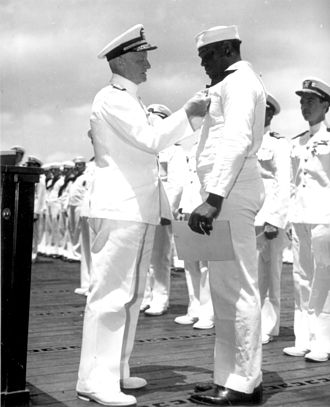 Now (2020) the Acting Secretary of the Navy  is going to name the next aircraft carrier after him.  An air craft carrier is a symbol of American might; most are named after Presidents. History will be made, if it happens, because Dorie Miller was the grandson of slaves and the son of a share cropper. He served as a mess attendant in a segregated military and was not trained to fire weapons.

I enlisted in the US Air Force to escape the assembly line in Detroit. I missed the battles in the jungles of Vietnam.  But ended up in the sand of Libya North Africa during the time of Col. Muammar Gadhafi. This was in the late 1960’s and there was still unrest in America. The military was officially desegregated but there were some who resisted change.

I was part of a small group of enlisted personnel that went in to see the ‘Black Base Commander’, to air some grievances. He listened to us then told us what to do. As a Tuskegee Airman, he understood where we were coming from, but we still had to do our job and if we didn’t, he would put us in jail, and throw away the key.  His name was Daniel ‘Chappie’ James Jr. and he was the ‘Black Colonel’  who became the First African American Four-Star- Generals for the United States Air Force.