The late great Wayne Dryer (May 10, 1940 – Aug. 29,2015) was a man who practiced what he preached. He quit his college job lecturing on positive thinking and motivational thinking techniques and went on the road lecturing and  selling his first book Erroneous Zones.

He sold so many books out of the back of his station wagon and showed up to so many book stores and made so many media appearances that he made the best-selling list before book publishers even notice what was happening. 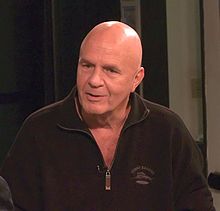 My mom was starting over after having left her first five kids with their dad, her husband  in Mississippi. He was so abusive that the last time he beat her, he said next time he would kill her,  she believed him, so she left in the middle of the night and headed North. She never got remarried but kept having kids. I was the ninth of 14.

Dyer built his success with lecture tours, a series of audio tapes, a PBS program and regularly publishing new books. He would recount anecdotes from his family life and use his own personal experiences. The fact that he was a Navy veteran just added another level of experience.  As another military veteran (Air Force & Army) I could identify with him also.

Dyer worked as a high school guidance counselor before he became a Professor of Counseling Psychology at St. John’s University in New York City. His focus was on positive thinking and motivational techniques. He took a trip to his fathers grave and was changed. When he returned  to his teaching job he turned down a tenured position to follow his new intuition.

I started blogging because I was taking early retirement. I chose personal development because it kept me straight during tough times. My mom sent me to stay with my dad while she went into the hospital. When she came out they decided to let me stay with him, so I spent the next nine years with him. That was a changing point for my life.

I fought to get a job on the auto assembly line in Detroit Michigan while in my last year of high school, but found out I wanted more. The money was find but the work was a grind. I had passed the 90 day probation period and was set to work until retirement but I decided to join the Air Force during the Vietnam War. I missed the battle in the jungles of South East Asia but went to the hot sands of  Libya North Africa then joined the cold war in Europe.

I came back home to take care of my dad then went off to college where I went back into the military, but in another branch as an Officer. I would come home to visit and always wondered how she could wait on the bus, during the cold Detroit winters. Most of the seniors would be sitting around talking about the old times but she was getting out. When she passed at the age of 90 I learned the rest of her story.

I dedicate my first book to my mom. Standing in the Shadows, Listening to the Greats!!!  A blog novel of true stories of ordinary people who overcame all kinds of odds to become extraordinary, who then turned around to help others. If you don’t write your own story, nobody else will.