It all starts in the mind! DISCIPLINE according to the dictionary is the training of the mental, moral, and physical powers by instruction, control and exercise. It’s the state of mind that leads to a conditioned orderly life. 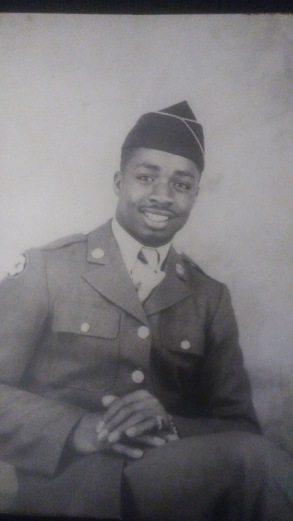 This is my dad who fought in WWII.

One of the eight core values of the Empower Network for success requires daily blogging. I started “this blog” with pen on paper today because my computer was in the shop. Must have something to do with that military mind-set.

Good habits are those small things you do every day, to move toward the direction you want to go. Guess what? I just had a flash back; I still remember reading “Fun with Dick and Jane,” That was a flash all the way back. Sometimes I think of myself as a dinosaur because of all the new tech stuff, but I have the heart of a dragon. The right words, still have the power to move people.

Me in Air Force blue.

Now we wake up, and check our email. We use, to wake up and read the newspaper, now its email. Young kids look at and operate little tablets, before they even start preschool. When I was in college, for our computer class, we used punch cards for the main frame. Now the students have computers for each desk. Because my lap top was still in the shop, I had to go to a friend’s house to use their computer.

Jim Rohn wrote a book titled Leading an Inspired Life and he said “Discipline is the bridge between though and accomplishment, between inspiration and achievement, between necessity and productivity”. To me discipline is that thing you do to get the job done without anyone watching over you. It’s being responsible for your own personal behavior.

Me again but in Army Green.

You never know who, or how ‘life change’ will come. My mentor Jim Rohn met his mentor, Earl Shoaff (a wealthy business man), when Jim was only 25 years old. At this time Jim had been working for six years, was married with children, and he was broke.

Earl Shoaff asked Jim several questions, that made him think a little different, and it changed his whole life. ” So, you been working six years, how is that working out for you?” Jim said, “Not too well. Things cost too much, and how can you take care of your family when the company only pays you so much”. Earl told him, it’s not that things cost too much, you just can’t afford them. The company pays more, but you must change to get the higher pay. You must make the internal changes, to get to where you want to go.

It was after Jim Rohn had moved to Beverly Hills and a friend of his asked him to speak at a Rotary Club event that he started his next adventure – lecturing and personal development. He titled that first lecture “Idaho farm boy makes it to Beverly Hills”.

On campus in front of military display with flags of all those students who have served.

As a results of Jim Rohn working on his self, and telling others, he traveled and lectured all over the world, and spoke to more than 6,000 audiences. His teaching and philosophy influenced a generation of personal development leaders. Google search Jim Rohn to see, or hear what others had to say about him.

He said we must bring something of value to the market place. What do you want to do with the rest of your life? Is it the spring, summer, fall, or winter of your life? Whatever period it is, you can change it. The opportunity is real the time is now.
H.G.M.

Jimmylee Velez
GREAT STUFF!! Yes, I agree, and people are so scared of the word discipline, yet it yields MOST of our desires if applied. Amazing information here Earl! Thanks for sharing!

p.s. I love the part about writing this blog because your computer was in the shop! Fantastic!

Juanita Simpson
I love the story and how you didn’t stop blogging because your computer was unavailable, such discipline.

Sheena
Having self-discipline is necessary.

Daphne Dobson
Great post Earl! I love Jim Rohn. He is one of my favorite mentors. Love what he said here; “Work harder on yourself, then you do on your job.” Discipline is so … key to everyone’s success. Thanks for sharing!

Nestor Nidome
I use to have such a hard time with discipline! Thanks for the tips

Earl Hackett
I guess discipline came a little easier, because of my military background.